BTI - Before the Internet 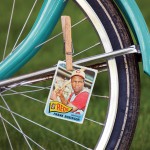 
Before the Internet...
What a phrase.  It seems like the current generation of youngsters won't have any grasp of what the world was once like before the world wide web changed our lives.   In many ways, they already have no clue.
Before the Internet... in the card world, set collecting was a true scavenger hunt, literally like trying to find a needle in a haystack.  While it can still be a challenge and a sea-fishing expedition online, it's not quite the same, not like it used to be.

Sports aficionados, and specifically sports card collecting aficionados (sounds much better than sports nerds doesn't it?) have long enjoyed the unique, obscure and random in sports cards.  Every player is important, especially when it comes set collectors.  And of course, the set collectors best friend is the obscure or random collector, offering a checklist of players cards that generally would be left adrift in a box of commons used as a doorstop otherwise.

For instance, for every ten Willie Mays or Tom Brady fans out there, there's at least one avid Mark Lemke or Don Strock diehard lurking in the shadows.

The set collectors savior has always been those random collector guys.  But we've all noticed the erosion of true set collectors. THEY have become hard to find.  For a while, card companies put a damper on the practice, by selling full collections. 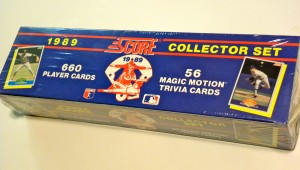 '89 Score: Took the 'chase' out of set collecting

It's to the point now that no one really talks about these one of a kind set collector-types, kind of like that one friend that left the poker game a few years back hardly to be heard from again.

The one you might recall fondly, 'Remember "Johnny No Cards" he was a little strange, but oddly I wish he was still around.'

Kind of like that.  Set collectors are always a tiny bit strange, and likely to track you down in a weird manner, possibly shouting random questions like 'Hey, do you have the 1968 Topps #529?  And that's in the aisle of the grocery store. 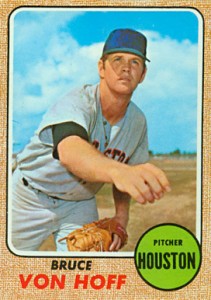 And then, ultimately, since this card just happens to be the holy grail for the set collector (and lucky for you, he happens to be one of your friends that you like to torture) the bidding begins:

But in reality, it was never about the money on either side of the transaction back then.  Usually it would end with a fair trade and a dare, or the right to ask out an older sister on a date AND a superstars card.

You:  'Sorry, all about supply and demand'
Awkward Set Collector:  'Fine, you can ask my sister out and have my Nolan Ryan.  I hate you.' 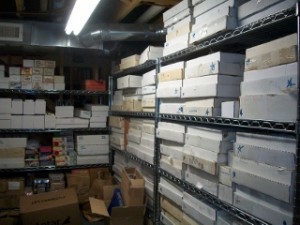 Yep, I long for those days. When finding that elusive common made your day.  Nowadays, even the casual collector can find themselves stuck in a mountain of useless commons that NO ONE will ever want.

The challenge now, is to even find a base set that is achievable as a full set.   With refractors, blues, reds, purples, turquoises and retro-nuclear reactor cards, it's gotten quite out of hand.  Maybe the true obstacle now is to just know how to figure out what a complete set is comprised of.

All the while, there will always been true and pure set collectors.  And while the 'Interweb thingy' may have made it easier in some ways to find those commons, the challenge is still there to complete a set.

Of course, you have to pay shipping costs for that extra common rather than have your friend torture you!  Either way, even though they are a dying breed, there are still some true set 'aficionados' out there.  They are now just much harder to find now than the common cards they scavenge for.  At least they remember what it was like... before the internet.