Inside a Box of 2012 Panini Golden Age Baseball

product my first reaction was to pass. It seemed as if another company was trying to “get in” on the small craze begun by Topps’ Allen and Ginter product, and I really care about baseball cards, not bugs or animals or Hollywood or what have you.

However, as the order deadline drew near the rumors of some pretty good baseball items in the product began to circulate and we took a flyer on one case. When they finally arrived this week (about a month beyond the original release date), we decided to bust open and a box and see what was inside. According to the advertising we had heard, “2012 Panini Golden Age Baseball mixes the best of baseball’s past with great athletes from other sports and personalities from other professions.”

And that is EXACTLY what we found. No more or less than the promise. However, we were surprised that the product grew on us with every pack despite the presence of horse racing, boxing, movie stars, etc. In fact, by the time the last pack was ripped, we decided we really liked this product!

First, it covers an excellent era of American pop culture which is where the “Golden Age” name originates. It allows for some great subjects across a broad cross spectrum of the culture. Additionally, Panini took the time to find and use some rather unique photos for the different players, people, etc.. The Frank Robinson

card celebrating his winning the Triple Crown (coincidence that it came out in the Miguel Cabrera Triple Crown year?) is a good case in point. It is NOT your common picture of that Hall of Famer as you can see in the picture 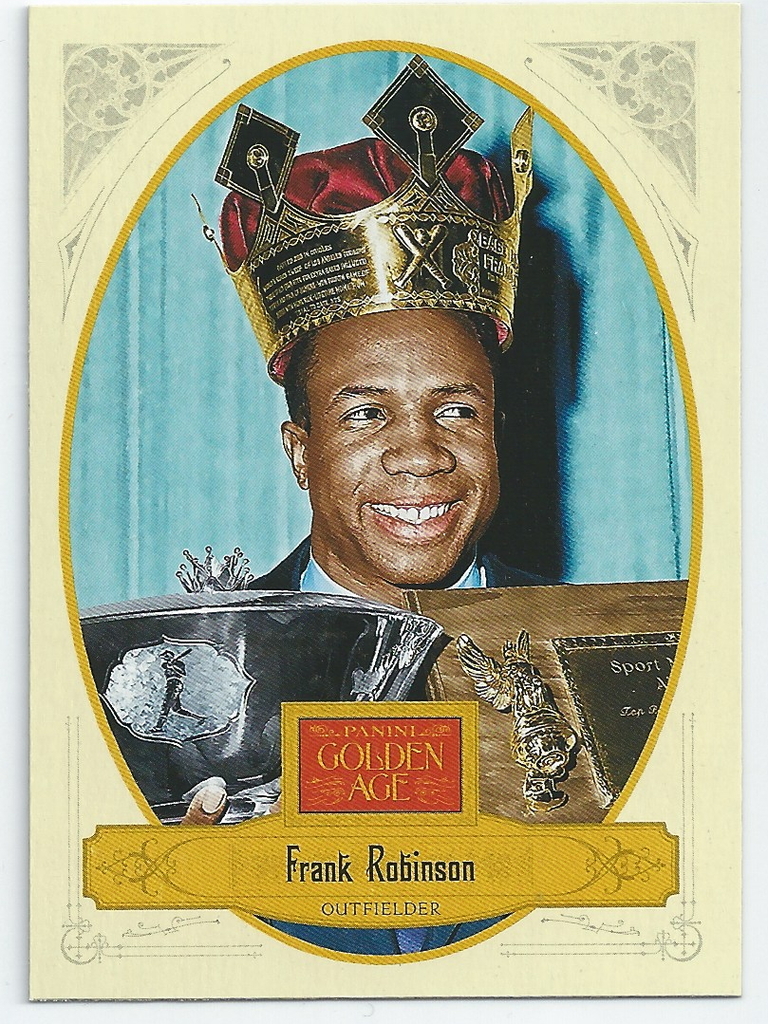 And the inserts are crazy! It will not be easy (or cheap, we assume) to get all the insert sets completed as they only fall one or two per box. But they are really worth it! We particularly are fond of the Batter Up inserts which are a nice tip of the hat to that often over-looked 1934-1936 set. Really nice cards.

Finally, the box toppers are a nice touch. We opened two boxes (pricing one out to sell by the pack at the shop) and we got one each of the Ferguson Bakery Pennant Box Topper and a Movie Poster Box Topper. We were very pleased with the quality of each piece, and frankly, thought Topps could learn a thing or two from Panini in this department as the Allen and Ginter toppers have been pretty static, and the Heritage box toppers are rarely worth opening.

. The pictures on the card fronts are rather hit and miss on their quality. Some are phenomenal for clarity and uniqueness. Others just look like a paint by number job (Cleon Jones’ card is a strong example of that). And the card backs are just a bit “fuzzier” than they need to be to capture an old-time feel. The write-ups are good, but they are not always easy to read.

Out of the 150 card base set we received 113 cards, but four were duplicates, leaving us with 109. Not bad, but also not necessary in this day and age as other sets have shown.

But my only real gripe is this: there are two hits promised in the box (one memorabilia card and one autograph), and in a “baseball card” product shouldn’t at least ONE of them be of a baseball related subject? Our relic was from a dress worn by Grace Kelly. Our autograph was from Maureen McCormick (aka Marcia Brady). Fun, I guess, but I want baseball!