In a year that was seemingly destined to belong to 19 year old hype machine Bryce Harper, Mike Trout has not so quietly emerged as the current go to guy for collectors.  The Angels outfielder has impressed many by making the All-Star game as a rookie as well as providing ESPN with loads of top 10 highlight reel material. 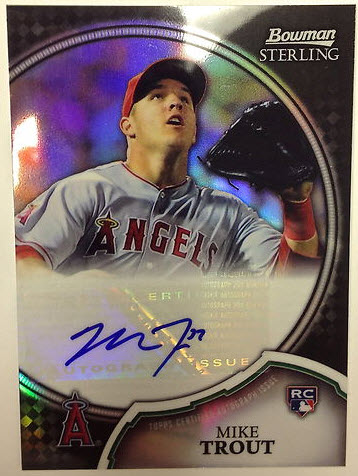 Since arriving full time in the majors on April 28, the 25th pick in the 2009 draft has blown up on the field as well as in the hobby.  Thanks to prospect products like Bowman, Bowman Draft, Bowman Platinum, Bowman Sterling, Topps Pro Debut, Tristar Obak and others, the young Mr. Trout has helped releases from 2009, 2010 AND 2011 jump off of hobby store shelves.

Fortunately the MLB rookie rules allow his 2011 base cards to count as true RCs, but they do not diminish any of his previously released prospect singles.  2011 releases that are benefitting from hosting his true rookie cards include Bowman Chrome, Bowman Draft, Bowman Sterling, Topps Finest and Topps Update.

Leading the way of course are his autographed rookie year cards.  If you had an extra $1,900.00 lying around, you would have had this 2011 Topps Finest Purple Refractor

numbered to just five sent over to your house.

Trout’s success is not limited to his 2011 singles, as evidenced by this 2009 Bowman Sterling Black Refractor

autographed single moving for an astounding $2,150.00 (plus shipping since 2K+ isn’t enough for free shipping).

With his league leading .355 average and respectable 13 HRs, the “Millville Meteor” could easily remain hotter than this summer’s record weather.  Hobby shops everywhere would not mind seeing that happen as collectors continue to hope to land his singles.

Mike Fruitman owns Mike's Stadium Sportscards in Aurora, Colo.  You can read his column on Sports Collectors Daily every week, focusing on what products are selling best in hobby shops. Enjoy new arrivals and big hits from Mike’s on Twitter.  Mike’s is always looking for more friends on Facebook  and you can email him at  cardmn5150@aol.com.