Just in time for the start of the NFL playoffs, a new website has arrived, focusing on some of the greatest pro football players of all-time and their top trading cards.

VintageGradedFootballCards.com offers articles on more than 20 of the most important football cards of all time, articles that provide tips and tactics for investing in high grade, older football cards, and links to live, real-time auctions of those cards. 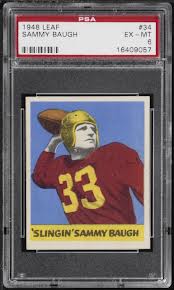 Readers will find information on the careers of the players whose rookie cards are the most valuable  as well as an examination of  what makes those cards so popular.

From the 1888 Goodwin Champions Harry Beecher to the 1957 Topps Johnny Unitas and Bart Starr to the 2000 SP Authentic Tom Brady rookie card, collectors will learn a little about the scarcity of graded cards and what one can expect to pay to get one.

What did one collector/investor pay for one of the few mint 1935 National Chicle Bronko Nagurski cards?  You may not believe it.

Why is the 1955 Topps Four Horsemen of Notre Dame still a solid choice even though it was produced years after they played their last game?

In 1966, two players on the same team who went on to Hall of Fame careers appeared on football cards for the first time.  Find out who they are and which one is so tough to find in a graded mint 9.

Vintage is in the eye of the beholder, so those of you who were kids in the 1980s and 90s and always wanted a Joe Montana, John Elway or Dan Marino rookie card but couldn’t afford one, will see them featured too.

There are lists of some of the best rookie cards by era, information on getting those old cards graded and why it’s important for an investor to buy the highest grade possible.

The site’s online article library will continue to grow in time.  If you’re thinking about purchasing one of these highly sought after cards, Vintage Graded Football Cards offers a place to gather information and learn more about them.