Lou Brock & Bo Hart - Sharing a Card, If Not a Similar Career

Everybody who collects baseball cards seems to have an opinion regarding “relic” cards. The cards with pieces of game-worn or used equipment embedded into them were hugely popular when they first appeared. However, over the last few seasons, some collectors have been treating the cards almost as a nuisance rather than a “hit” in a pack or box of cards. Just for the record: MLB Memories will be glad to take any relic cards people want to send us!

We have long maintained that the value of baseball cards does not lie in their Price Guide listing, but rather the memories they evoke and the stories that they can help tell. While this is easily demonstrated with the “regular” cards of childhood days or collections gone by, the relic card can also bring a special twist to the stories that shadow the national pastime. 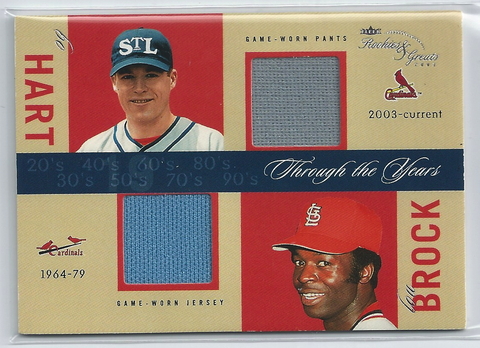 This came to mind recently while going through a box of relic cards that were being prepared for our eBay store. In the box was a nice-looking card from 2003. The card was actually from the Fleer Rookies and Greats set of that season. It was from the insert set known as ” Through the Years Game Used,” and it was actually a dual relic card featuring Hall of Famer Lou Brock (and a piece of his once game-worn jersey), and a player with a great baseball name, but whose career did not match his early promise…Bo Hart (along with a piece of game-worn pants).

And that’s the story! How does a guy easily forgotten by most baseball fans (die-hard Cardinals fans likely excluded!) actually share a card with one of the all-time greats of the game? Of course, part of the answer comes from the fact that both men played for the St. Louis Cardinals in the major leagues. But another part of the equation is found in the fact that the card companies like to make the special cards stand out from time to time, and multiple relic pieces is one way they have chosen to do that. In 2003 the choice of Bo Hart to share a card with Lou Brock seemed to make sense.

Bodhi J. “Bo” Hart played second base for the St. Louis Cardinals in that 2003 season. Actually, he started 65 games at second base, but that was enough to lead the team (Miguel Cairo started 33 games). Hart had been drafted in the 33rd round of the 1999 Major League Baseball Draft by the Cards, and St. Louis fans had reason to believe his promise was about to show!

Hart made his MLB debut with the Cardinals on June 19 of the 2003 season. And he started strong! In fact, he broke a major league record (previously held by Kirby Puckett) when he hit. 460 in his first ten games with St. Louis, making his first month in the majors among the best debut month for a player in major league history. Hart’s batting average remained above. 300 until August 14, 2003, and he finished the season with 82 hits and a. 277 average. He also hit four home runs, and drove in twenty-eight.

Alas, as is so often the case, the brilliance at the beginning was as bright as that light would ever shine. After the first month of the 2004 season, Hart was hitting only .154 and was assigned to the minor leagues. He never came back to the major leagues with any team even though the Rockies and Cubs gave him extended looks in the minors. Hart finished his professional career in independent baseball in 2008.

BUT…here’s the deal! Hart played in the Show! Hart played well for  half a season at a level very, very few ever attain. And although there may have been disappointment over the length of the career and success, for a brief period Hart was thought of well enough to share a card—an inserted relic card, no less—with one of Cooperstown’s immortals. Not a bad story for a relic card to tell.