In the spring and early summer of 1969 I was a pre-teen with confidence and joy because I was a fan of the Detroit Tigers! They were reigning World Champions, and all the guys I hung with were positive the new division play would make another Series victory even easier for the Bengals. Of course, we were wrong, but we were just kids!

As with so many others our age, the following of baseball was close to an obsession, and one way that practice manifested itself was in the collecting of Topps baseball cards. Truth be told, we knew nothing of the fledgling ecology movement or even the rightness of litter laws. BUT, what we did know was a couple of found pop bottles could be traded in at the corner store for a pack of new cards with a stick of gum. What a deal! You are right if you think our neighborhood stayed litter-free (well, at least of glass bottles).

When 1969 Topps Baseball was originally released the set's 664 card checklist earned it the distinction of being the largest baseball card set ever. The set boasted some great players (40+ Hall of Famers are represented within it). And accompanying this sizable set were two of the most popular insert sets ever released - Deckle Edge and Decals.

Both of these insert sets were loved by the guys in my circle. The smaller, black and white deckle edge were cool because of the weird scallop cut on the edges AND the inclusion of some great players. We were thrilled that THREE of our Tigers were in the set (Horton, Freehan and McLain), and we could not understand why Lolich and Kaline and Cash were snubbed.

But the real love of inserts came from the 1969 Topps Decals. Bright, colorful and very cool because they looked like the baseball cards…but you could rub them off on stuff! In my mind's eye, in fact, I can still see my pasteboard notebook, at the end of the summer, with a COMPLETE set of the decals rubbed off on to it. Sure, I cringe now, but at the time I thought it was the best!

The decals were very similar in design to the 1969 base set. Of course, the decals were much smaller at 1 3/4" x 2 1/8" Second, the color of the inside of the circle housing the player's name was different from the regular card. Most importantly, however, for most of the players Topps used a picture that was different from the base card picture. As kids we loved that because it was like being able to get two cards of the players instead of one!

The small size of the decals and the fact that they were designed to perish during "normal" use (like my long ago lost notebook) conspired against their long-term survival. It is really unfortunate in consideration of the fact that the issue contains a Reggie Jackson "rookie", a last-year piece of Mickey Mantle, and Hall of Famers in abundance among its 48 players. Perhaps that is why I decided a while back to make this set one of the few graded card sets that I would put together. Regardless of why, I am glad I did, because every time I work on the set or just admire it, I am that pre-teen once again.

Maybe I should go look for pop bottles. 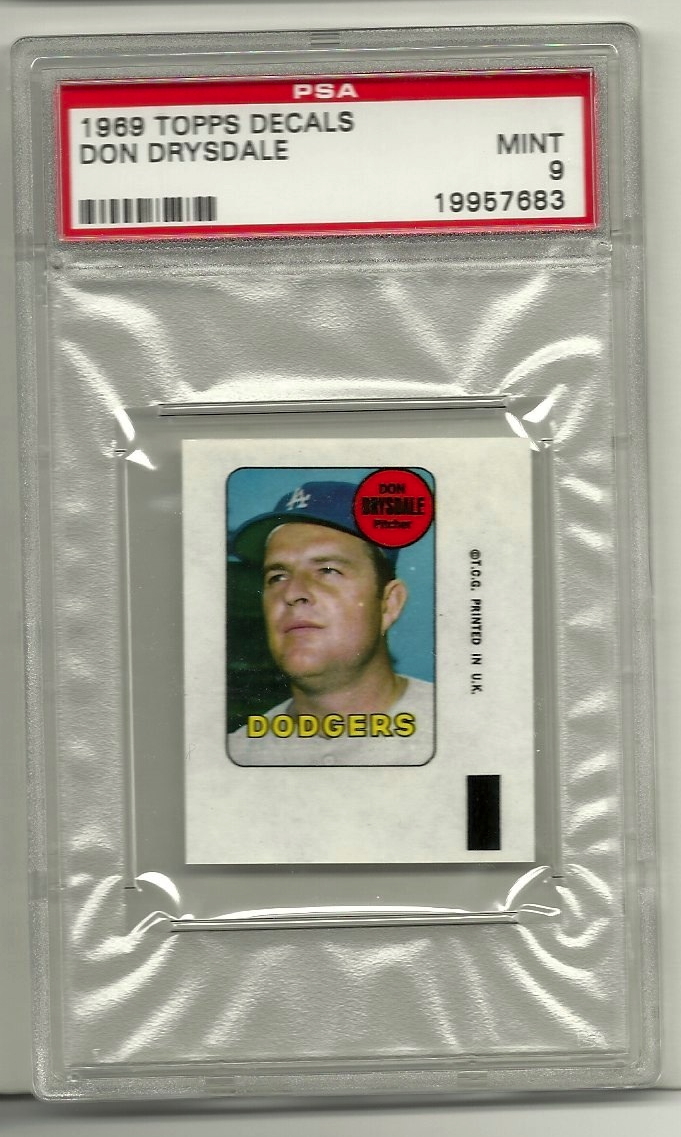